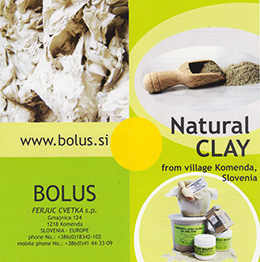 In the ancient Greece, fractures of the limbs were treated by using bandages impregnated with clay mud. Sebastian Kneipp, a Bavarian priest and one of the founders of naturopathic medicine movement specifically recommended poultices that contained clay and vinegar. In Switzerland, clay was often used in therapeutic treatment for tuberculosis. Chest of the patient were painted with hot clay mud and left that way for four hours. Sometimes such therapy led to success.

Sebastian Kneipp started using clay therapeutically and enjoyed significant success fighting against tuberculosis, fever and dysentery. He soon gained many adherents among the major doctors all over Europe. Therefore Kneipp and also a few other significant names in German natural medicine, deserve full credit in establishing that shapeless mass of soil as significant therapeutic source, especially in recent times. Kuhn, Just, Felke and others, used clay in their natural therapeutic procedures. But it was under the influence of the Berlin physician Stumpf, that the use of clay for medical purposes became strongly rampant in the beginning of the last century.
Many simple people have already known about the clay and its properties and healing powers for more than a thousands of years. Ancient Greeks, for example, used mud wraps to bandage and heal broken limbs. But they also used clay together with herbs in many other ways. The Egyptians, for example, painted their deceased with clay because it was considered a natural way of destroying harmful substances and protection against tissue degeneration. Even sick animals were anointed with a mixture of clay and natural vinegar and transferred to the barn with clay mud where they instinctively sought the spot with clay. French troops used clay to protect themselves against intestinal disorders, Russian soldiers, for example, during the first world war but did not go into battle without a bag of clay. (Source: Clay heals / Glina zdravi)
We dig our clay in ecologically clean area in the woods near Komenda, where there is no industry and no farmland for about ten kilometers in every direction.
In this forest the clay is already been mined for 200 years, mainly by potters working in area of Komenda. But for the last 40 years digging is done only and exclusively by Janez Ferjuc - Bolus Cvetka Ferjuc s.p. which also supplies potters and Tile makers in the vicinity. The company is also selling clay intended for coverings and personal medical use. Clay has been checked and. analyzed by the Institute of Public Health in Kranj, University of Maribor- Faculty of Civil Engineering and in referential laboratory Analitical ACME Laboratories in Vancouver.

When the excavation is perfomed industrial clay and clay intended for therapeutic purposes are seperated. Clay is separated according to quality and with regard to the layers of the excavated cave. Approximately 1/10 of the excavated material is the best and clearest clay, which is adequately prepared for consumption. The whole process is performed manually, by means of dedicated tools.

Clay soil is between 5-8 million years old. Clay for the personal use is of the highest quality, with the most positive elements.

Process for the preparation of clay in the coating
Selected clay is dried in the sun and through the appropriate procedures crushed to a powder and prepared for coating.

Preparation of the clay for internal use :
Excavated clay is dried in the sun and the crushed. The material is then purified of all unnecessary the particles. When the clay is dried, we must be careful to not touch the clay with your hands or any metal object. The dryness of clay is carefuly controled with special apparatus. The prepared clay is packed in either glass or paper packaging with special wooden tools.

During the process of preparing the clay, it is extremely important not to lose its strength and quality. All procedures have to be perfomed with appropriate tools. Other providers of clay usually use hardware equipment, without separating the layers, which are very important in determining clay's own quality. The dryness of clay is also of utmost importance.

HOW IT WORKS IN THE BODY:
using its absorption power the clay destroys bacteria and attracts everything that is toxic. It adds what we lack, it substracts what we have to much of, which is especially important if we suffer from inflammation or even gastric ulcer. Clay works very actively by removing the destroyed cells and promoting their restoration, regulating metabolism and acting as a facilitator of many organs, improving blood counts, preventing colds, inflammation, etc.. It is best to drink clay preventive 3x per year. Thus we can prevent many problems. (Source: CLAY medicines)